Part 2 of a series about my flying trapeze and circus journey. Read Part 1 here.

Not long after beginning my life as a flying trapeze student, I replied to a job posting at the school for a photographer. They hired me! I was utterly clueless about the community I was joining and what being a staff member would mean for me.

As I became more entrenched in the trapeze and circus world I realized that in the tent is where I longed to be – where I needed to be, physically, mentally and emotionally. Miraculously, I found a way to get paid to show up at the rig. Even though I was making at most minimum wage, it didn’t matter; it wasn’t about the money. I had the privilege of not only experiencing my own journey as a flyer, but watching so many other people come into the circus environment and experience transformations of their own – conquering fears, exceeding expectations, gaining strength, achieving previously unimaginable success.

Soon, I was doing more than capturing a flyer’s moments on camera – I became a flying trapeze instructor, helping students navigate their progression. First I became a “board instructor”, where I spent my time on the platform 23 feet above the ground. I taught students how to take off, how to maneuver into a trick, how to be safe, how to trust themselves (and their instructors). Before long I was teaching from the ground, pulling students to new heights on safety lines.

From the platform or from the ground, my job is to encourage each student to take the leap, while assuring them that yes, the net will always appear.

I never stopped being a student, and continued to advance my own flying. One of the most frustrating things about learning any circus art is grasping that learning the progression is not linear. For every few steps ahead, you somehow take nearly as many steps backwards. Fix something in your takeoff? Watch your swing and trick timing fall apart. Have a bad fall to the net? Oh look, now you’re all in your head about it and do everything you can to sabotage each and every turn. It is challenging for students to understand that progression is full of just as many ups as downs.

But life is like that in many ways, too – at least my life is. In the outside world, I could fake it and pretend everything was just grand – even after my brother’s suicide and my initial separation, I shed very few public tears and gave no one any reason to believe that I was anything but FINE. But for whatever reason (and for better or for worse), throwing myself into flying trapeze stripped away a lifetime of built up exterior layers and shattered my shield of armor, exposing a vulnerability that I could no longer keep private. One failed trick or catch would leave me bawling. For me, showing this level of emotion was nothing short of pathetic. What was going on? I could survive my brother’s suicide and a divorce but I couldn’t survive a bad trick? 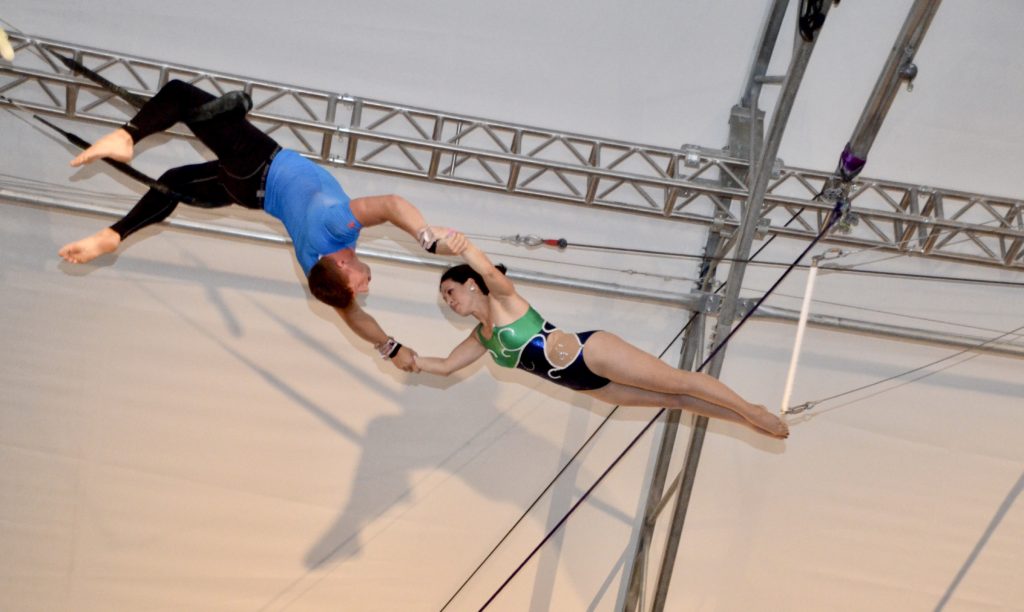 A catch from my second-ever show performance in 2014. Pointed toes for the win!

I think that somehow, when stepping into the role of a flying trapeze student, I allowed my true, raw, emotional self to appear. This is a persona I hide from everyone, including myself. I accepted the tent as a safe zone, and after so many years of sadness I actually found one place where I was forced to stop faking it. Like it or not, the emotions were pouring out. I can’t say that my colleagues were happy or even supportive about it – I saw the eye rolls directed towards my breakdowns. But I stopped caring what anyone thought. For me, it was a desperately needed relief. After all, you can’t really fake a whole lot as a flying trapeze artist, especially once the safety lines come off.

With all the shit that my life has thrown at me, flying trapeze is the one terrifying thing I pursued proactively. In case you weren’t aware, flying trapeze is as SCARY AS HELL – but so is a career move, dealing with a sibling death, and accepting a failed marriage. Even now, as someone who performs “professionally”, every time I get to that platform before a catch, the fear creeps in. I have a respectful relationship with the fear – I am humbled by it, and aware of it and the danger of what I am doing while at the same time am able to respect my training, my skills and knowledge that even in a worst case scenario I can protect myself (and the catcher) and remain safe. I always know the net will be there to catch me.

If only life were that easy.