So, given my time away from writing, I have shared basically nothing about my circus / trapeze journey. It’s been an incredible six years, from nervous student to nervous instructor to performer to aerialist to my recent promotion to “senior staff”. Given this is such a large part of my life now, you can expect me to write more and more about my training and teaching experiences.

However, it would probably be useful if I provided a bit of history and context to what (and why) I do, how I got to where I am. It’s far too much to put into one post, so here is part 1.

The first time I became aware of the fact that a normal, regular, everyday person such as myself could learn to do the flying trapeze was while watching Sex and the City. Episode 82, “The Catch”, aired on Aug. 10, 2003 and featured Carrie Bradshaw / Sarah Jessica Parker taking a class at Trapeze School New York (TSNY) in Manhattan. I remember thinking to myself when watching the episode, TIME OUT. A flying trapeze school? That is the most ridiculous thing I had ever heard of.

Clearly, I had to do it.

Almost eight years later, Trapeze School New York established a school near my home in Washington D.C. and I arrived for the first time, ready to experience the insanity for myself. The person who stumbled into the tent on April 7, 2011 had no idea what she was getting herself into. It ended up being a life-altering day for me, not that I nor anyone else would have foreseen it at the time.

A Leap of Faith

After walking in to the trapeze school and seeing the ladder ascending 23 feet in the air connecting to a platform elevated over the net, I immediately realized I was in way over my head. What the hell was I thinking? I was 35 years old, far too old to try something “extreme” like the flying trapeze. I was weak, physically and emotionally. I was a disaster and ridiculous for thinking this was something I could do. Chalk up another failure for me, and add a $60+ price tag to this one.

I brought a ton of baggage with me to that very first class. A year and a half earlier, my 32-year-old brother killed himself. While the initial shock of his death had subsided, the grief was still a key force shaping and altering me; I still had no idea how to manage the pain and was a lost soul struggling to put one foot in front of the other to find any way forward. In addition, although I was married, the marriage, for me, was over – I was not happy, knew nothing was going to ever change, and was coming to terms with the fact that I wanted out. This was information that I had admitted only to myself at this point, and the weight of my secret was crippling me.

With all of this nonsense going on in my life, who the fuck did I think I was, coming to take a flying trapeze class?

Standing on top of that platform for the first time, I remember telling myself what an incredible failure I was. I was terrified and overwhelmed. I would never be able to do it. The bar was too heavy. I was too weak. I was not prepared, I was not capable. What a waste of money. Yet somehow, I jumped. Or maybe I was pushed … regardless, I was swinging through the air, with all of my baggage trailing along behind me.

Oh, the exhilaration after that first class! I caught my knee hang – twice! I did backflip dismounts! I didn’t die!!!!! I was hooked. I immediately signed up for my second class, and a weekly adventure quickly became a more serious – and more frequent – pursuit. 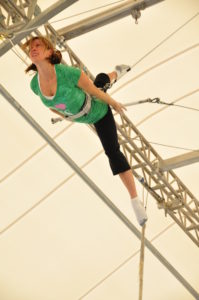 One of the first photos I can find of me flying, about six months after I started. I still do this trick … and sadly, I still have (and wear!) these clothes.

About four months after my first class, I separated from my husband. While my new flying trapeze habit did not contribute in any capacity to the end of my marriage or any marital relationship woes, I’m not sure if I really would have had the confidence to leave him without it.

Let me explain. It’s probably strange for people who knew the pre-trapeze me to hear me say that flying trapeze gave me confidence and self-esteem; I was never necessarily a person lacking in these attributes (on the outside, anyway). But climbing up that ladder, jumping off a platform, contorting into whatever shape I’m supposed to for the trick of the day and floating into another person’s hands for a catch is a ridiculous confidence boost, even after the adrenaline wears off. Fueled by this realization (“leap and the net will appear”, credit to writer John Burroughs for the quote), it became a lot easier for me to face my husband and tell him things weren’t working. I wasn’t happy. Things needed to change. It was time for us to separate. That it was over.

I leapt. The net appeared.

As I attempted to navigate yet another new normal, my flying trapeze progression in many ways mirrored my personal journey forward, post-separation. It had ups, it had downs, it had epic breakdowns, meltdowns and disasters, yet day after day I just kept picking myself up and moving forward. Some days even managed to be a bit of improvement over the prior day. The journey continued.

One Reply to “Finding My Safety Net – Part 1”