Any athlete knows that an individual sport or athletic endeavor demands far more than a person’s physical ability – the mental and emotional elements are just as critical as the strength and skill each person brings to their game.

(sidenote: I realize that I haven’t devoted much, if any, time on this blog to discuss my circus life. That’s going to change, but in a nutshell, I am a flying trapeze instructor and circus / aerial performer. Yup – totally normal life progression.).

I took some time off of my flying trapeze training to focus on preparing for an aerial show I performed in back in early August. It’s amazing how even a short amount of time off can make me feel so out of shape. When I returned for my first flying trapeze training in nearly two months, my lats were in so much pain the next day I could barely move. Let’s be clear, the muscles used for flying trapeze (particularly how we use lats) are VERY different from other exercises and aerial trainings. There is simply no on-the-ground replacement for time in the air.

Knowing I had some cobwebs to dust off, and feeling how sore I was after just one training, I did the worst thing a flying trapeze artist could possible do.

I started to think. BIG mistake.

Because once you start thinking, you start questioning your skill. You start wondering if you can still do a trick — any trick — without dying. Most of what I’m working on I do without safety lines, so there is a very real risk of injury (minimized due to countless hours of training and practice, but still there) that all of a sudden seems so overwhelming that I don’t even want to climb the ladder 23 feet up to the platform without being strapped into a safety harness.

My company’s (the trapeze school) tagline is, “Forget Fear, Worry About the Addiction”. The addiction was almost immediate (obviously), but the fear is something that lingers and doesn’t really ever let you forget it completely.

Being a Great Big Trapeze Baby

Even when I show up to train with the best intentions, sometimes my nerves or self-doubt gets the best of me. Planning to throw big tricks? Eh, let’s just to the basic stuff I’ve had out of safety lines for years and could do in my sleep. Multiple tricks to the catcher? Eh, I’m better on the ground coaching the other flyers, I don’t need to actually go up there and, you know, fly.

Such was the case last week. On Thursday, I thought I was really ready to step up and get back in the game, to build more confidence and to throw some tricks to the catcher for the first time in ages. My old bones ached just a little bit less, and I was starting to feel like I was getting into “flying shape” again. But not surprisingly given some time away, my layout — a trick that doesn’t come easy for me on the best days — wasn’t where I hoped it would be. Practice was a struggle (admittedly, more mentally than physically). So the time comes to do catches, and what do I do?

I stayed sitting on the sidelines. I did nothing.

I was so disappointed in myself after Thursday’s training, I decided to not let myself pussy out when I trained again on Sunday. To hold myself accountable, I texted my coach my plan, and indicated that I would catch – best case scenario my layout, worst case scenario my whip (much easier and more basic trick that I’ve probably caught and returned a million times).

He never responded. So fast forward to training, when I am keeping my fingers crossed he never received the text so I can wimp out again.

He received it. Dammit.

But you know what? I committed to throwing my tricks, and each one got a little bit better. I threw my layout until I shed the last cobweb and I resembled something that almost looked like the flyer I was when I was in top shape. And I threw that trick to the catcher – who caught it – then I easily returned to the board, because that’s what I do. 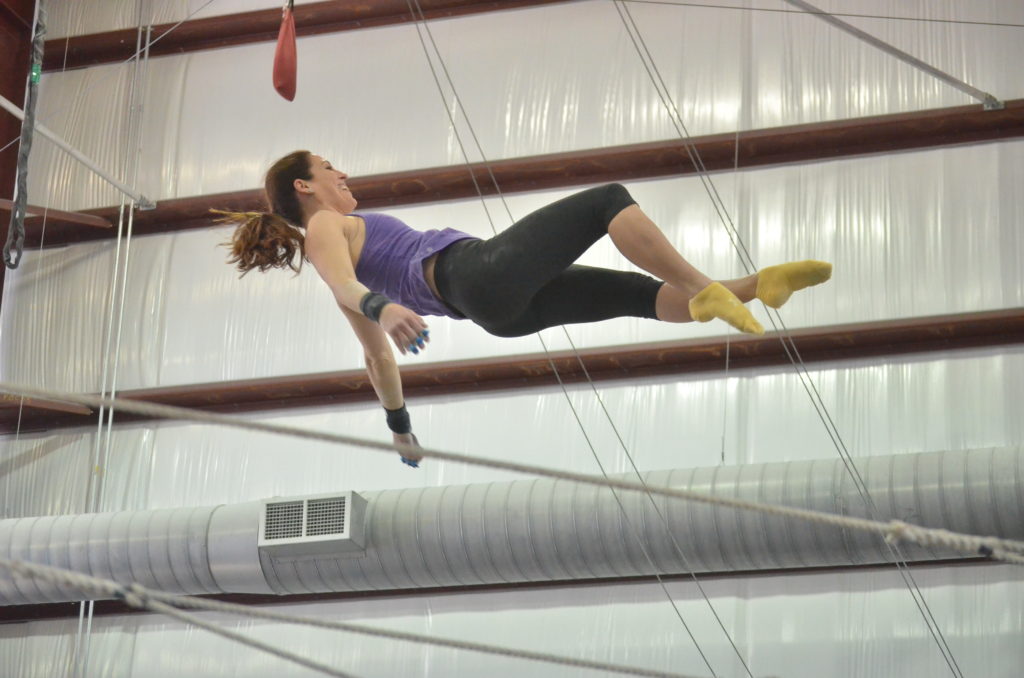 Oh look, here I am, bouncing in the net after whatever trick I just threw, happy that I once again didn’t die.

Next Project: Catch the Salto

I am ready to declare myself back in acceptable flying trapeze shape — physically, mentally and emotionally. Hopefully this focus and enthusiasm remains, because I am ready to return to my primary flying goal/project: catching my hocks salto.

I did this trick without safety lines for the first time back in February (ugh, forever ago) – you can check out what that first one without lines looked like here. I got to the point where I was throwing timers (when a catcher hangs for the trick, but you know you’re not going to attempt to catch it; rather the catcher evaluates his height and timing, and the challenge is on the flyer to throw a good, consistent trick even when there is person hanging upside down on the other side). I was making progress, but then took a flying break so I will be back to square one from a catch perspective.

I will keep you all posted on my progress, maybe even with a few (hopefully not too comical) videos!