Seven years ago, I wrote my first post here on Life After Normal. Obviously, I haven’t kept up with the blog as I hoped — although I keep promising / threatening to get back into it, because y’all know I still have a lot to say about a lot of things. And I still have all the feels.

The fact that I am still here seven years later proves that life does go on — after a sibling suicide, after a divorce, after friendship and relationship changes, after career changes. While the impact of forces such as grief may shift and vary, momentum did carry me forward, albeit as a different person through a different world.

So in conclusion, there is a life … after normal.

Reflections of the way life used to be
For whatever reason, I’ve become a bit reflective lately. When I look at where my life is now — who I am now — I see how different this person is today than the one I was seven years ago. I also recognize how different I am from the person I would be, if personal tragedies did not strike.

So, after seven years … where does life after normal end, and a new normal begin? Are the lines between the two still blurred (and will they always be?), or am I solidly on one side or the other? And how much time has to pass before the “new” normal simply becomes … normal? 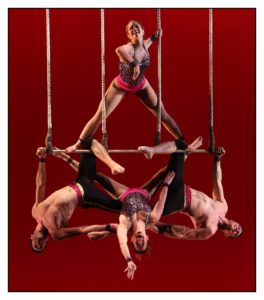 If you told me seven years ago that I would be a circus artist who performed (twice!) at the (Obama) While House among other stages and locations … I would have thought you were nuts. Maybe it’s me, embracing this life, who is actually nuts! Photo credit: Rich Riggins

At times I think I’m on exactly the right path, while other times I ask myself what the fuck I am/was thinking, making the intentional changes that I made (as opposed to reacting to events out of my control). But I continue forward, focusing on things I’m passionate about, hustling to try to make enough money to pay my rent, pursuing dreams meant for someone far younger than myself.

How did I get here? Giving the middle finger to a “traditional” path was step one, I assume. At any rate, I judge me as me alone, not where I should be or how I stack up against others — long ago, I stopped comparing myself to other people, because my life is pretty ridiculous and there is no point comparing apples to toasters (I don’t know if I’m the apple or the toaster in this metaphor). There are certainly people who look down on my choices with disdain, and others with envy. I just look at the choices as mine. Right or wrong, logical or insane, this is my crazy life.

For whatever reason, as I’ve reached this time of reflection, I’m working hard to return to writing to try to figure some things out, or at least to make the path forward more clear. What’s next, and where should I go from here? Although I’m barely a reflection of the “old” me, too much time passed for me to identify as a “new” me.

So who the fuck am I? How many opportunities for a “new me” does a person get in a lifetime? I guess for now, I am just another person who puts one foot in front of the other each day, realizing that there is simply no such thing as normal.

One Reply to “When Does “Life After Normal” Become the “New Normal”?”