Ah, Thanksgiving. What a great day! You eat and eat and eat until you’re about to burst … then continue to eat some more. And top it off with pie. Heaven.

The Breakfast of Champions!

This year, my husband and I spent the holiday at home on our own, some quality time just the two of us. It was quite nice, very low-key and relaxing. Since he is not American, he doesn’t have any particular traditions or preferences for how we spend the day. Actually, I don’t either – other than the fact that football will be on TV all day. And that we start the day with mimosas.

I laugh when people ask if I eat turkey on Thanksgiving. Um, no – I’m vegan! Duh! However, that doesn’t mean that I can’t eat just as much – and enjoy my food just as much – as the non-vegans out there.

Since it was just the two of us this year, we decided to keep it simple. We schlepped off to Whole Foods on Wednesday afternoon (along with the rest of the greater Washington, D.C. metropolitan area) and stocked up: ready-to-eat essentials such as pre-made stuffing and mushroom gravy; turkey breast for my non-vegan husband; green beans, soup and fried onions for the casserole; potatoes and onions; a ridiculous amount of wine and beer. We were ready to go.

I started Thanksgiving morning after 14 hours of sleep the night before – and felt better than I had in ages. Time for mimosas!

In order to have something on my stomach to absorb the mimosas, I took a chance with an everything bagel and non-dairy “cream cheese”. It was the first time I tried this delightful spread since switching my diet two years ago. Surprisingly, it was quite tasty on the bagel, I hardly noticed a difference from the real stuff. 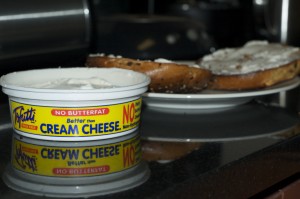 It really was better than cream cheese! Really!

Since we planned to eat an early dinner, I snacked on my usual hummus, chips and olives to hold me over. Along with more mimosas, of course.

Dinner prep was a cinch. I thawed a Tofurky – and for all you haters out there, shush, it’s quite tasty – that required about 90 minutes in the oven. Once that was roasting, I got the potatoes ready to go (and decided to throw some garlic in the oven to roast and add to the mashed potatoes), cut up the green beans, and got all the pre-made stuff ready to warm up. By the time the Tofurky was done, everything was not only ready – but the dirty dishes were also either washed or in the dishwasher and the kitchen was spotless. Amazing.

One of the highlights of the meal was the green bean casserole. I found the recipe I used at Yeah, That “Vegan” Shit and it was delish (even though I may have used tablespoons of flour instead of teaspoons to thicken the soup … and probably tripled the amount of fried onions. Still yum.). As you can see, my husband purchased some bacon bits to “enhance the flavor” of his sides. Gross.

All in all it was a great meal. I’m looking forward to the leftovers over the next several days.

I’m sorry, did I forget to mention dessert? Cherry pie – the only “substitute” ingredient in the vegan version is using non-dairy butter instead of real butter. Trust me, you’ll never notice the difference.

And that, my friends, is how a vegan does Thanksgiving. 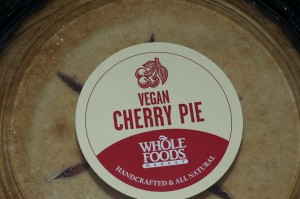 One Reply to “The Lazy Vegan’s Thanksgiving”