As it approaches midnight here in Washington, D.C., I thought I would take a moment out of this crazy week to acknowledge Veterans Day in its final minutes (better late than never!).

Recently, I was given a number of old photo albums from my grandmother (my father’s mother). Included in these books are photos of my late grandfather, on a boat somewhere in the Pacific in the mid-1940s during the war. I can’t help think what a different time it must have been back then – but was it simpler? did the challenges faced by my grandparents’ generation far exceed anything we could imagine today? Or was it just … different? 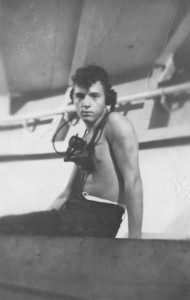 My grandfather, serving his country (even though he may not have been old enough to legally do so).

As the story goes, my grandfather altered his birth certificate to make himself appear older than he was so he could enlist. I think it’s clear from these pictures, that boy is nowhere near 18!! Sadly, the only parallel I can draw in my sheltered life is altering my driver’s license back in the early 90s, changing “1975” to “1970” so my identification would show that I was at least 21 years of age and therefore old enough to be drinking in a bar. 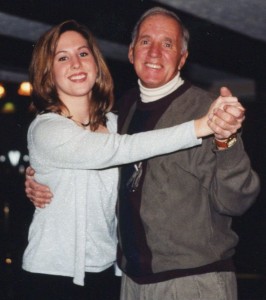 Any way you look at it, I am grateful that my life is so sheltered, so fortunate, thanks to many who served long before I came along. One thing I try to remember, when my political beliefs can differ so significantly from those responsible for sending men and women into combat situations for some “greater good”, is that perhaps someday the citizens of a country thousands of miles away will have the same thoughts that I have now: the realization that life is good, thanks to a long-ago and perhaps long-forgotten sacrifice by a faded memory held in a photograph.

So on this Veterans Day — to both of my late grandfathers as well as so many others — thank you.