Yesterday morning when I woke up and looked at my phone, my photo app was kind enough to remind me that it was the 12 year anniversary of my wedding in England. Um, thanks for the memories, technology? 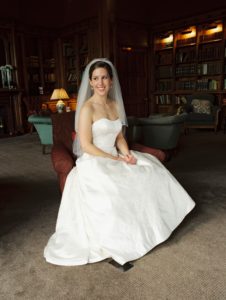 Me on my wedding day, looking out the window and plotting my escape.

While learning of my long-forgotten wedding anniversary brings surprised laughs as opposed to emotional feelings, anniversaries have been on my mind lately. We are approaching 10 years since my brother killed himself.

A decade. A weird, round milestone number. The day when my life took a dramatic detour from its path of “normalcy”, full speed towards the nonsense that is my current existence.

How Did I Get Here?

At a friend’s wedding a few years ago, fueled by one or a dozen drinks, my college friends and I were joking about what the title of my memoirs would be, should I ever write them. What we came up with was something along the lines of, “My Brother Died, I Quit My Job, Left My Husband, Joined the Circus … and I Could Kill You With My Bare Hands.”

And you know, that’s a pretty solid summary of my journey since 2009.

But the thing is, it doesn’t do me a whole lot of good to look behind me. For better and for worse, here is where I am. Any expectations of who I was or who I was going to be are long dead and buried, as are countless friendships and relationships that no longer serve me or my journey forward.

The much more interesting question is, where will the next 10 years take me? Where will I be when it’s time for the 15th or 20th or 40th anniversary of my brother’s suicide?

I’m pretty much over being tired or stressed out or sad about things in the past. I’m plenty tired and stressed out and sad thinking about the future (thanks, Trump). But in all seriousness, moving to Seattle was a pretty strong way of saying “TIME FOR CHANGE”.

In nine months, I’ll have a new anniversary. Settle down, I’m not pregnant. Rather, I’ll be celebrating one year in Seattle. I readily admit my life changes are off to a slow start, as I’ve settled into a rhythm that’s not really all that different from the life I left behind in D.C. But I’m good with slow and steady, figuring things out as I go.

So I will continue to learn from the past, but I refuse to dwell on it. I fully believe that the best is yet to come, and look forward to ignoring anniversaries of past sadnesses, and embracing celebrations of what’s ahead.