Oh, the joys of packing. With movers showing up in less than a week, I am putting every part of my life into a box, preparing all of my worldly possessions to be shipped across the country.

While I feel that over the years I’ve done a pretty good job of scaling back and letting go of the clutter, of course there are things that I held on to. But with cross-country moving expenses being covered by me (spoiler alert: not cheap!), everything I own now comes with an attached dollar sign. Therefore I’m taking the hard look at everything and deciding whether or not I need to keep it, and therefore pay to move it.

Some things are easy to part with — old clothes, tons of books, unused kitchen appliances. Do I use it? Can I survive without it? Does it spark joy? Purging can be freeing, and I’ve tossed many things without a second thought.

However, with that part of the packing behind me, I am now faced with the bins of, well, stuff. Old stuff. The sentimental stuff. Memories, mementos, moments, all carried around in a box.

In other words, the emotional “oooooof”.

Should I feel obligated to hang on to “precious mementos” from my childhood that would maybe mean something to my parents (who passed them off to me after a move of their own), but truly mean nothing to me? A collection of Seven Dwarf carvings hung on my bedroom wall as an infant — or so I’ve been told, since I have zero recollection of my childhood nursery. But somehow these carvings are a part of my belongings now. To keep them seems pointless, but to part with them seems somehow inappropriate, even if there will never be a child of my own to pass them along to.

Then the random items. I still have a Cabbage Patch Doll. Do I care about this doll? Not at all. But should I hang on to something that represents such a cultural moment, that even 35ish years later it seems like something I should keep? 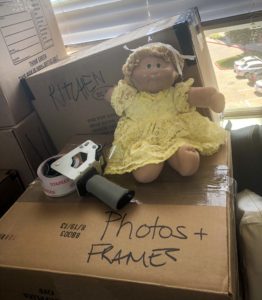 The judgement is strong with this one.

I also still have my wedding dress. What am I supposed to do with that?? I looked into selling it, and after 12 years it’s not worth much. I always joke that I want to wear it to a costume party (or even have a “wear your old wedding / bridesmaid dresses” party) — but such parties have not occurred. I can’t just throw it away. Or can I? Ugh.

I don’t want to throw something away simply to save money. But I do want to be sure that what moves west with me are things that I care about and that are meaningful to me. It doesn’t matter if I don’t look at these things or interact with them on a regular basis, but there needs to be some kind of emotional connection.

Preparing to move and packing up to this point has been surprisingly unemotional, but I think I’ve hit the hard part – the part that actually has nothing to do with moving.