It’s March 20, which can only mean one thing. WINTER IS COMING! D.C. finally has snow in the forecast!!!!!

I grew up in Buffalo, and let’s be clear – I do NOT miss the long, cold, snowy winters of my childhood. But I DO love a good snowfall every now and then, and we got nothing here in D.C. this winter. Once or twice a season, I want at least a foot of snow (that goes away in a week or so).

This winter was nonstop cold and cold rain, and I have major snow envy of all my east coast friends. But according to the Washington Post‘s Capital Weather Gang update from three hours ago:

Less than 12 hours before the storm starts, model forecasts suggest as little as 2 inches and as much a foot could realistically fall in the region Wednesday.

While the snow isn’t supposed to start until tomorrow, today we were greeted with freezing rain, much to the dislike of my poor dog. I decided to make a big pot of soup to get me through the (probably?) last winter days of the season.

I’ve been on a bit of a cooking kick over the past few months. I invested in an Instacart membership awhile back, and in addition to saving me tons of money on grocery store visits, an unexpected surprise is how much more I cook and prepare food on my own, vs. going for takeout several times a week (saving even more money – the investment has more than paid for itself!). I’ve really enjoyed making big batches of soups, stews and chili this winter.

[Follow this link to save $10 off your first Instacart order! You’re welcome!]

Today I made Lemony Lentil Soup, a recipe I found on Gimme Some Oven. This is the third time I made it and it’s a new favorite (I’m obsessed with lentil soup). The author provides stove top, slow cooker and pressure cooker versions of the recipe – I’ve only done the stove top version. I definitely recommend it if you love hearty soups like I do. 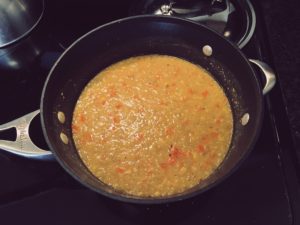 So while my friends up along the east coast hunker down for yet another snowstorm (and kids home from school), I’m planning to fully enjoy the beginning of spring with this (hopefully) fabulous snow and delicious soup.

note: I’m regularly asked about vegan recipes and what vegans cook/eat, so hopefully these kinds of posts are helpful. I’ll only post the good stuff / things I would serve my friends and family!