So last week was a bitch. Seriously, most days I felt as though I had been run over by a truck — and then that truck backed up and ran over me again. However, a 9-hour sleep on Thursday and a 12-hour sleep on Friday certainly re-charged my batteries. While I was up and full of energy before 7 a.m. on Saturday morning, Arlington County declared a state of emergency and joined the rest of the East coast on a Hurricane Irene alert/watch. 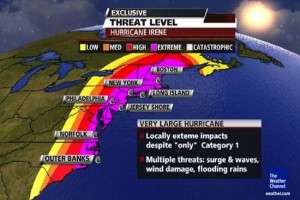 With a number of prior commitments cancelled or rescheduled, all of a sudden, I had the entire weekend FREE and to myself. Heavenly!!!!! How to fill the time, outside of my constant efforts to resist the temptation to drink mimosas all day?

So there you have it. No, I didn’t get to read/relax as much as I had hoped, but my magazines are at least in neat little chronologically ordered piles. That is progress, and I will take it.

One Reply to “The Weekend of Irene”