I am no stranger to the drugstore counter. Between allergies, asthma, anxiety, and the occasional need for antibiotics and painkillers, I spend a shocking amount of money each year on prescriptions. I imagine that my medicine cabinet rivals other so-called “healthy” individuals … who are in their 80s.

Given the amount of time I spend waiting on-line and around the pharmacy counter, I am constantly amazed at how idiotic some pharmacy employees are. As these people have access to some very sensitive and private information, you would think they would need to meet a common sense benchmark to be hired.

This weekend, I ventured over to my pharmacy to pick up a prescription. The area was surprisingly crowded, with people milling around waiting for their meds. I had called in my prescription earlier that day, and received a phone call that it was ready. I got to the front of the line and gave my name. The pharmacy assistant — let’s call her “Ms. Einstein” — began digging through bags and boxes looking for the right one. She ended up down at the other end of a rather lengthy counter, at the “drop off” area. (I, obviously, was on the “pick up” side).

Suddenly, at the top of her lungs, she yelled, “Laura, what medication are you picking up?”

While I directed every ounce of my willpower to suppress my urge to shout “VICODIN!”, I couldn’t help but think, really? Isn’t shouting out that question in front of a dozen other shoppers a bit, well, inappropriate? Now, I’m not really what one would call a private person – I mean, between this blog and the fact that I will answer basically any question with a brutally honest answer, what can I say. Also, I (luckily) don’t have any “embarrassing” medications that I would deny requiring. Regardless, I decided to play along.

“BIRTH CONTROL!” I yelled, just as loudly as she had. 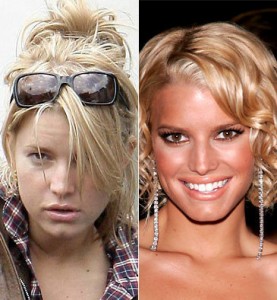 If I was a celebrity (outside of my own fantasy life, that is) it would have been a perfect opportunity to capture me in my "Stars Without Makeup!" glory.

While this was going on, Ms. Einstein behind the counter had finally managed to find my prescription. As she went to ring it up, she asked me in her booming voice,

“So, how has this prescription been working out for you?”

At this point I just had to start laughing. Um … this wasn’t anti-acne cream or an asthma inhaler. It was birth control. As in, you take a magic pill each day, do what your bad self wants to, and viola! No babies!

I debated saying something very dirty and inappropriate, but as I hadn’t exactly endeared myself to the other pharmacy customers, I decided to be polite.

“Well, as I am not pregnant, I would say that they are doing their job just fine.”

Ms. Einstein laughed, I laughed, I paid the bill and was on my way — but not before winking at the old geezer gaping at my “beauty”. 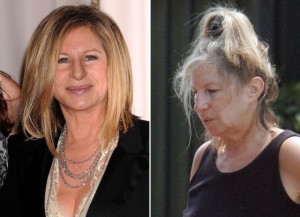 All right, Jessica Simpson was a bit of a stretch. The picture on the right is more the look I was rocking at the pharmacy.

One Reply to “Adventures in Pharmaceuticals”